Now that all is up and running, we can start to generate the actual contracts.

As we will generate some ServiceContract interfaces, we have to add a reference to System.ServiceModel.dll in the current project. 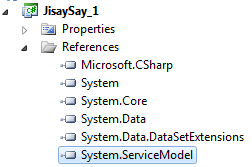 Then, at the bottom of the script file, iterate on all web services, and declare a public interface called I<ServiceName>Contract, decorated by the System.ServiceModel.ServiceContractAttribute, by adding this code after the XML is parsed.

Then, we have to add parameters to each operation. This is a little bit tricky. We have to create a string that consists of all attributes separated by a comma. But we have to remove the last comma, as it has to end with the last parameter name to be C# valid code. In our example, the UploadFile operation declaration should be as this :

This is a good place where we would usually use a method to retrieve the argument string to clean the code. To declare a method in the script file, you have to enclose it between <#+ and #> tags at the end of file. As we are currently using anonymous types, we cannot pass the list of arguments directly to the method, so I will temporarily use Tuple (this will be corrected in later tutorials).

(Note : you could use String.Join instead of building the string manually).

Now, we only have to call this at the right place in the script above. As before, do not care about the Tuple thing as it won’t last long.

If you look at the output file, it should be almost compilable. The only error lasting in my case is about the “Guid” return type that is not defined. This is the normal behavior as .NET Guid class belongs to the System namespace. We must add the right “using” at the top of the file. Add this using right before iterating on all webservices. 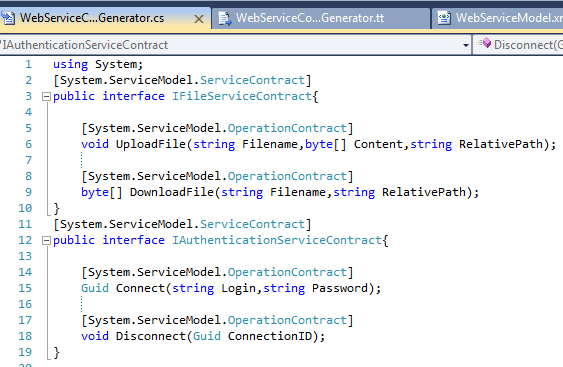 As you may see, the output is directly usable. If you add a new webservice, a new operation, remove one, or modify one, you will just have to regenerate this class and it will remain synchronized.

There are many ways we could improve the output. We should add services, operations and arguments comments, and perhaps declares more “using” statements to clean the output. Consider this as a homework to do. The output should ultimately look like this:

To conclude, we now have fully functional services contracts generation. It is easily expandable and manageable, but some remarks have to be pointed:

All these points will be addressed in the next posts.